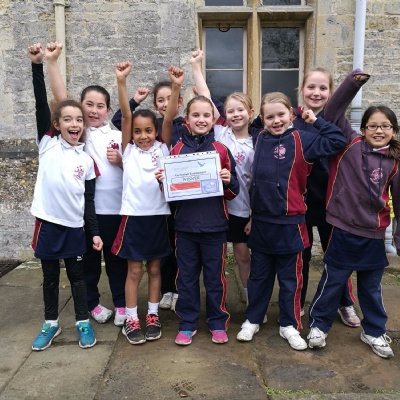 The U9 girls took part in the annual Hatherop Castle Netball Tournament this week and came away as overall winners.

Four local schools took part in the round-robin competition. Matches were just 5 minutes each way so early goals were crucial.

The Rendcomb College team played the hosts Hatherop first and stamped their authority on the tournament with a confident 5-1 win. Next, they played Westonbirt and achieved an equally convincing 6-1 win which saw them enter the final game in a very strong position.

The opposition, St. Edward’s, were also unbeaten and a tight game ensued to decide the tournament winners. Rendcomb College showed great maturity and controlled their passing well. They scored early and had the edge on their opponents throughout. Rendcomb College went on to win the game 5-3 and finish the competition as overall winners. A fantastic and well deserved whole team effort!