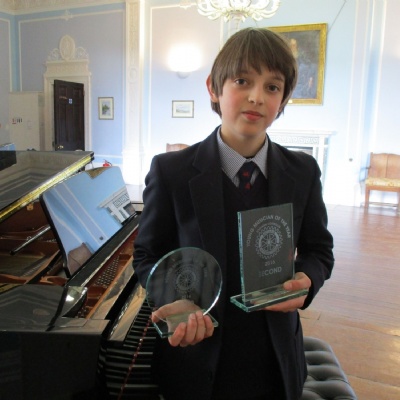 Twelve year old Edwin Ward from Rendcomb College, an independent school located between Cheltenham and Cirencester, has triumphed in the annual South Cotswolds Rotary Young Musician of the Year competition, winning the top prize for ‘Best Pianist’ and for coming second overall.

Winning the piano category in January, Edwin went through to compete in the final against eight others on 21 February to a packed audience of more than 200.

Speaking about his success, Edwin said: “I am so pleased! This is the first time I’ve taken part in the competition and I feel very proud. I was quite nervous before performing as many of the competitors were much older than me but it feels great to have done so well.”

Dominic Franks, Director of Music at Rendcomb College said: “The annual competition is open to 11-18 year old instrumentalists and singers from across the West of England, making 12 year old Edwin’s win all the more impressive. Hearty congratulations to Edwin from all at Rendcomb College! We look forward to hearing Edwin perform again as he entertains prospective families at our Open Morning this Saturday, 5 March and he will also be performing a piece from his winning recital at our Spring Concert on 16 March.”

At the final, each contestant had to display mastery of technique on his or her chosen instrument(s) as well as a feeling for the music and a relationship with the audience. Edwin came runner up to the winner, violinist Daniel Harding, who is a Scholar at Wells Cathedral School.

Rendcomb College’s provision for the performing arts is continually expanding with two new Yamaha Concert Grand Pianos arriving at the school last year and a Performing Arts Centre currently under construction within the campus which is due to open later this year.