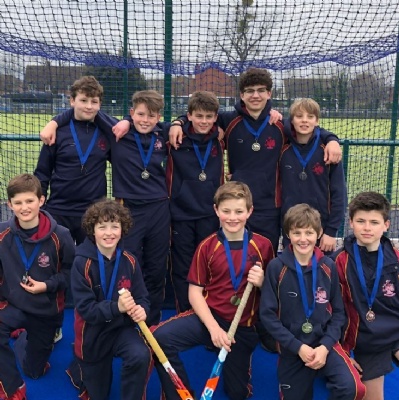 The 1st XI kept up their winning ways with a 3-0 win over local rivals St Edward’s. Rendcomb got off to a flying start, scoring within the first 5 minutes thanks to Oscar. With the match evenly poised there was a great defensive shift just before half time with Rendcomb keeping St Edward’s at bay through a period of four short corners. After surviving that, Rendcomb scored a second goal and went into half time with a 2-0 lead. St Edward’s had a chance to get back into the game but Morgan in goal pulled off a great save from a penalty flick. With 10 minutes left in the game Rendcomb put in a third goal leaving the final score at 3-0.

The 2nd XI travelled to Bloxham. The teams were well matched but Rendcomb started to string their passes together and work the ball into space. Nick finished a well worked move meaning it was 1-0 at half time. However, a sleepy start to the 2nd half and a dip in work rate allowed Bloxham back into the game, scoring two cheap breakaway goals. Unfortunately, Rendcomb could not find an equaliser before the final whistle. A tough lesson to learn in terms of game management but Bloxham travel to us for a return fixture in a few weeks’ time and the boys will be more than up to the challenge!

The U15 side continued their good form, taking their wins to four for the season, thanks to a 5-0 win versus Dean Close. After an evenly contested first 20 minutes, Nicky made it 1-0 to Rendcomb thanks to a well-taken penalty flick. Dean Close came close to equalising but goalkeeper Johnny pulled off a fine save to keep the scores level. After that we ran away with the game, with Luca getting his second hat-trick of the season with three clean strikes. Roman then finished the scoring a couple of minutes before the end, getting on the end of Tommy’s fine cross. There was still time for substitute goalkeeper Eddie to ensure we kept a clean sheet, preventing the Dean Close striker from getting a clean shot away as he honed in on goal. An excellent team performance seeing 16 boys play for the team.

The U14’s faced a very strong Malvern College team. The boys held out well for the first few minutes with solid defending from Nathan, Jimmy and the rest of the defence clearing the ball with each attack. Markus made a succession of brilliant saves to keep the Malvern attack at bay. The deadlock was finally broken when the Malvern attacker slipped past the Rendcomb defence and coolly scored. Another goal followed soon after but then Rendcomb held on until half time. The second half started well as Rendcomb put together some good attacking play. Unfortunately a quick turnover resulted in a breakaway goal for Malvern. Rendcomb continued to battle hard but some miscommunication in defence allowed more Malvern attacks. Most were bravely cleared by Marcus, Jensen, Arthur but two more goals were conceded, with the game ending with a 5-0 loss. Rendcomb could hold their heads high after playing in a tough fixture against very good opposition.

The U13s came second in the County Tier 2 tournament and have got through to Tier 2 Regional Finals with 2 wins 1 draw and a loss.

The senior girls travelled to Bradfield College and after a patchy start with lots of ground balls and a few side posts and cross bars, the girls finally found the back of the net. The midfield girls, Anna, Emily, Emily, Izzy and Kieze showed off their high standard transition skills moving the ball up and down the field to their advantage.

With some more excellent attacking work and smart play around the goal, the Rendcomb girls put more goals on the board, ending the first half 7-1. The defenders Daisy, Ella, Eve and Freya worked as a solid unit to protect the goal and keep Bradfield at bay and Mia made some excellent saves keeping any shots that did make it past the defenders away from goal. The final score was 13-1 to Rendcomb.