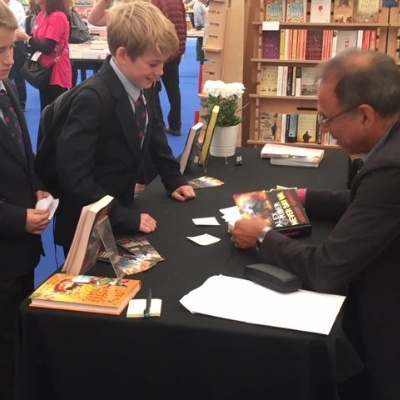 Rendcomb pupils embarked on the annual trip to the festival, listening to a talk given by Anthony on his journey into writing and the challenges he faced.

During his talk he spoke of his early school life and the challenges he faced before finding his passion for writing through late night storytelling in the library of his boarding school. He wrote his first book at the age of 16 however it took many years before it became published.

Year 7 pupil, Charlton, said: “Anthony’s story were a great example of determination and never giving up.”

After the talk pupils got the opportunity to go around the local book stores and had the chance to get their books signed by Anthony Horowitz.

Charlton continued: “The most memorable part of the day was when Anthony Horowitz read part of his next Alex Rider book which even his publisher hasn't seen yet!”

Head of English, Sarah Read, said: “The students loved the experience and were thrilled that they got to speak with, get books signed from and have a selfie taken with the great man himself. Horowitz is an engaging and inspiring author who really helped the students to understand that books are doors through which to see the world - real or imagined. From the discussions on the journey home, I think we have an awful lot to look forward to from these eager young readers and writers.”

Anthony Horowitz OBE is an English Novelist and screenwriter famed for his mystery and suspense writing. His works include 2 Sherlock Holmes novels and is the most recent author chosen to write James Bond novels by the Ian Fleming estate. He has also contributed scripts for ITV’s Agatha Christie's Poirot and Midsomer Murders and created such shows as ITV’s Foyle’s War and BBC’s New Blood.

His work for young adults includes the Alex Rider series, with the first book, Stormbreaker, being turned into a film in 2006 which included Ewan McGregor, Stephen Fry and Robbie Coltrane in the all-star cast.