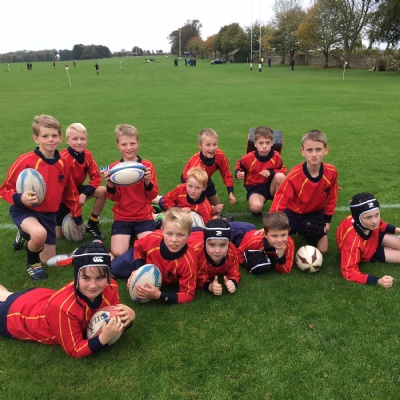 Rendcomb College Senior and Junior School sports teams have had a fantastic start to the season with all teams registering wins.

The boys’ U12 Rugby team have celebrated four wins this season against tough opposition including Rougemont School and St Edwards, Cheltenham.

Team spirit has also prevailed among girls’ sport, with the U14 Hockey team undefeated this season with four wins and three draws including hard fought wins versus Downe House School and St Edwards, Cheltenham.

The clay shooting teams have also been in action taking part in the Marlborough Sporting Clay Shield Competition, held at Barbury Shooting School. The boys’ team came 12th out of 27 teams, competing against the likes of Harrow, Eton and Rugby School while the girls’ shooting team came 5th.

These superb team results are in addition to a number of individual sporting achievements with Year 7 pupil Jemima Lister being selected to play for Swindon Town Girls Centre for Football Excellence in the Barcelona Girls cup next year.

Sport and Shooting at Rendcomb

Rendcomb College offers a breadth of opportunity at both Senior and Junior School level, offering competitive fixtures in a number of sports for both girls and boys.

Main boys’ sports include Rugby, Hockey and Cricket, while the main girls’ sports are Hockey, Lacrosse, Tennis and Rounders. A number of other options are available to both boys and girls including equestrian, clay pigeon shooting, athletics and badminton.

Rendcomb continues to produce sportsmen and women who succeed and excel at the highest levels of their sport, with recent pupil achievements including: Fencing for Wales, South West and English Schools Cross Country and Lacrosse, County and Regional Cricket and Hockey, District Athletics, Gloucester Rugby Junior Academy programme, National and regional equestrian, and our first national Dragon Boat rower representing Great Britain in the U18 Dragon Boat European Championships in Rome in 2016.