Some Fun Facts About Rendcomb College 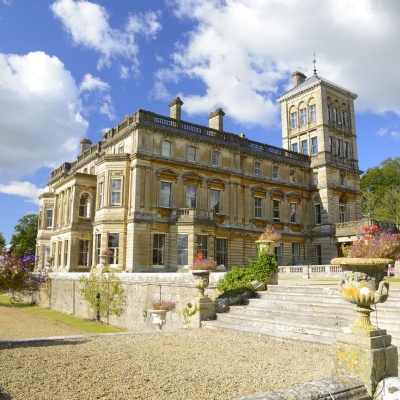 Rendcomb College is an independent boarding school and day school for boys and girls aged 3 to 18. It was founded in 1920 by Noel Wills. Rendcomb village is located in the picturesque market town of Cirencester, in the county of Gloucestershire.

So, now we know where Rendcomb College is, let us share 4 fun facts with you, that you may not know.

1. The much loved King Saul statue

The marble statue of King Saul had been loved and admired by students in the school, where it had stood pride of place in Saul's Hall from 1865 through to 2018. Over the years, students would decorate the statue to celebrate holidays and special events.

For example, Saul would often be dressed as Father Christmas and even Gandalf from Lord of the Rings. However, what was not known at the time was that the King Saul statue was actually a very expensive piece of art that had been sculpted by William Wetmore Story.

Weighting 5 tonnes in weight, the statue, which depicts Israel's first King, is now named Saul Under the Influence of the Evil Spirit and has been relocated to the Museum of Art in North Carolina. Rumour has it that all the glitter has now been removed.

2. There is a secret basement

Every Friday the sixth formers of Rendcomb College descend the steps in the old Mansion House to enter the basement. There is nothing spooky about this as the space is now used for the traditional Friday night disco.

Known affectionately as The Crypt, this secret nightclub is a space in which both boarders and day students can enjoy a dance, chat with their peers and have a meal. The other great news for students is that the nightclub comes with free entry. Students are also allowed to have two drinks, that are low in alcohol, as long as they have written permission from their parents.

So this Friday night disco is an incredibly safe space. If students want to sit and relax instead of dancing, then they can retire to the games room and play darts or pool. What a lovely idea.

3. The students have gone on to do great things.

Rendcomb College has nurtured some wonderful talent over the years and you'll probably be surprised at the name of some of its former pupils. One such name is Doug Ellison, who now works for NASA. He is the Team Leader on the Mars Rover Curiosity robotic spacecraft. In fact, he will be at the school's Founder's Day celebrations this year, their 100th celebration, as their keynote speaker.

If you know your horse racing, then you may be surprised to learn that the now-retired jockey, Richard Dunwoody, attended Rendcomb College.

The world-famous botanist, David Mabberley attended Rendcomb College and then went on to study at St Catherine's College, Oxford.

Other famous names include the writer John Middleton Murry, Jr, who you may have read as Richard Cowper or Colin Murry, the journalist Nicholas Wapshott, and the famous yacht designer, Angus Primrose.

4. Host of the Rough Runner Challenge

The first-ever Rough Runner Challenge was hosted by Rendcomb College and was enjoyed by year seven students who attend prep schools around the country. The off-road obstacle course that stretched for 2.5 kilometres, was undertaken by 100 year-7 students.

The college was proud to host this sporting event as it echoed everything that the college stands for, such as teamwork, enjoying adventures and working together to overcome challenges. Rendcomb College was chosen to host the event because of the impressive 230-acre land on which it is situated. The children had to navigate a forest trail and climb over haystacks. Great fun.

So Rendcomb College really does seem like an interesting place to live and learn. It was home to King Saul the much loved and decorated marble statue while the school nurtured great talent with known names being Richard Dunwoody and David Mabberley.

The college boasts an exciting underground room that is used for school discos and the college hosted the country's first Body Rough Runner Challenge for year 7 students. Rendcomb College will always be full of surprises and creative talent.